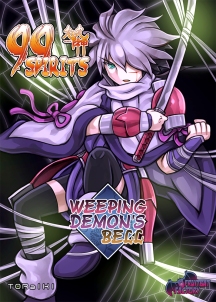 February 24, 2015. Fruitbat Factory is happy to announce the release of our third and final DLC for 99 Spirits: 99 Spirits – Weeping Demon’s Bell. The game is available today.

Weeping Demon’s Bell is the second side story for 99 Spirits, told in the Visual Novel style, similar to Cage of Night.

“As our first Steam release, 99 Spirits has a special place in our hearts. We are happy to have had the rare chance to localise all the available bonus content for the game as well. With Weeping Demon’s Bell, the 99 Spirits collection is now truly complete. ” says Jakke Elonen, Project Lead.

Synopsis
Rumors of someone collecting swords and kidnapping girls have reached the young blacksmith Kotetsu and his childhood friend Waka. A cryptic new Tsukumogami lurks in the night. Meanwhile, a darkness grows within Kotetsu as he is drawn into one battle after another.

When an invitation to entertain a nobleman arrives to Waka, the two are drawn into a test of their true nature. Can the two unveil the identity of their real enemy before it’s too late?

Little Hanabusa: A story about Hanabusa, who turned back into a child from a little happening. While Komiya runs around trying to find a cure, Gijin happens across her. What will Gijin do, finding Hanabusa turned into a child?

Saki’s Present: The weasels have become upset because Saki seems to not be paying them much attention lately. She seems to be doing something in secret, but just what is the truth behind the matter?

Komiya’s Medicine Hunt: A story about Komiya trying to save Hanabusa after she suddenly collapses during an expedition. After learning of Hanabusa’s plight, the five gods pledge their support, but…

“Demon’s Bell gave us a chance to explore Kotetsu, Waka and their relationship further and have new adventures as we bring our 99 Spirits journey to a conclusion. Hope you have enjoyed it as much as we did.“ says Ozhan Sen, Art Lead.

The game is released on Steam and other leading digital distributors on February 23th. The retail price is $4.99, with a -10% launch week discount.  Additionally, a 99 Spirits – Complete Collection will be made available for $27.99, including 99 Spirits, Artbook & Soundtrack Pack, Cage of Night and Weeping Demon’s Bell.

For more information, business inquiries  and to be included in the press release and review mailing lists, contact Fruitbat Factory at info@fruitbatfactory.com.