It’s finally out, a visual novel we’ve worked on for some 3 years in one way or another!

Check out the kick-ass trailer for this kick-ass game developed by Dendo-Denkido here:

It’s been an eventful journey to get here, so I wanted to dump some info about it.

Jiangshi x Daoshi defies explanation. On the other hand, it’s free so just go and play it for yourself.

It’s the product of many years of work by the developer Dendo-Denkido, who are awesome folk and you could always find their booth at Comiket (back in the day when those actually took place). Even if it’s not “long” in traditional terms, you can see their effort on every screen of the game. I don’t think there’s a single screen that passes without some animation. I rather think of it as playing a SHAFT anime. Oh, and it’s also fully voiced, with a very prolific cast of seiyuus!

The game is episodic, and after 8 years of development there are currently 3 complete episodes. Episodes I+II are now available for free at our end, and we will release Episode III – Lady Hexers later this summer, at which point it’s caught up with the current doujin release. The game is still very much in active development, and there should be more coming… eventually.  This quality doesn’t come overnight, but good things come to those who wait. If you like the game, you can show your support to the developers on Twitter! 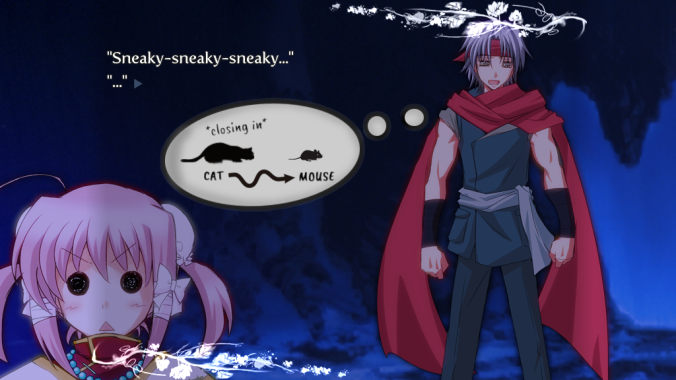 Up to this day, Dendo-Denkido has distributed the game for free in Japan, which we also took into consideration in our decision to release the game free of charge. Of course we still need to cover the translation bills eventually, but you can take it as a sign of how much faith we have in this game. Episode III is planned to be released as a paid DLC on Steam, and with a PWYW model on itch.io so people can still play it for free if they want.

Jiangshi x Daoshi is our final full translation into English by the late Conjueror (we still have one secret project that was partially translated by him, but that’s for another day) and edited by Garejei. Drenched as the game is in Chinese lore and the supernatural (as well as bizarre humor), Conjueror mentioned it was the hardest game he’s had the pleasure of translating. I hope you will like the result every bit as much as I have. 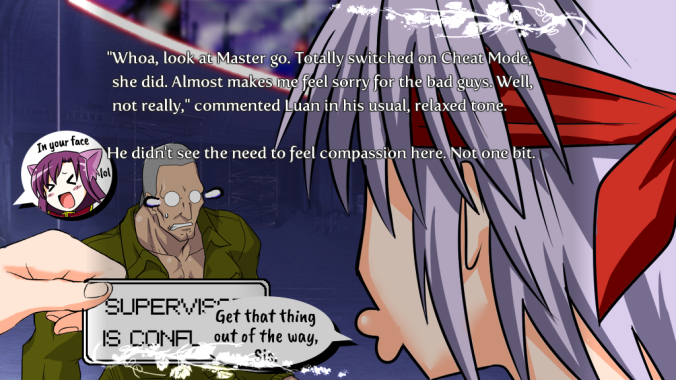 As there’s a large Chinese-speaking audience on Steam now as well, and it was something the developers wanted in the first place, we also more recently decided to translate the game into Simplified and Traditional Chinese, which translation should be released alongside Episode III – Lady Hexers later this summer.

Okay so this is where things got spicy. Of course we’ve followed the developments with Steam’s approval process with concern for some time, and as such I’m always worried whenever I submit a new visual novel for approval. Still, despite joking about it we didn’t seriously expect the game to get flat-out banned on submission (a rejection wouldn’t have been surprising, it happens more often than not, then you address issues and resubmit). Well, it did. Ticket closed. No resubmission option, no room for dialogue.

This despite the fact that Jiangshi x Daoshi doesn’t feature any adult content.

There’s certainly a lot of offensive content of various sorts (think South Park when it comes to the mature humor of the game), but… yeah, that response was unexpected. Moreover, as a consequence of that game ban, we learned that games that get banned on Steam… leak from the database. So certain sites knew of the ban and thus, of the secret project, as soon as we did.

This wasn’t a very pleasant situation for a release we had high hopes for, and we had to scramble to put together emergency plans with all possibilities considered, including a rapid ninja release the very next day in case that we’d have to release the game to obscurity outside of Steam, and with intense press scrutiny if the story ended getting picked up more (which I’m glad we ultimately didn’t have to do, as we’ve put the time to good use polishing the title, squashing bugs and adding more user friendliness features, such as the option to hide the UI for cool screenshots). 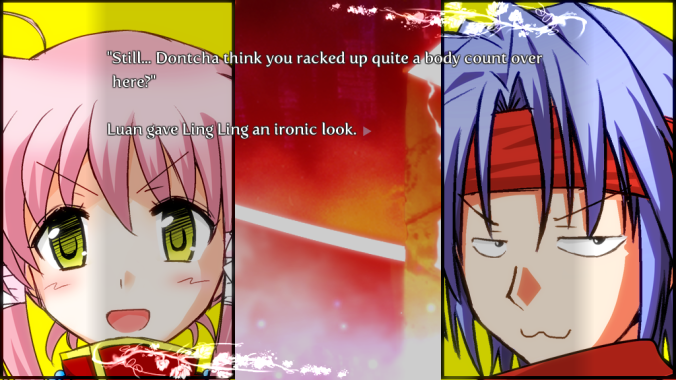 Luckily we received a response from our Steam rep (yeah, we’re fortunate enough to have one, I’m well aware most devs don’t), which gave us some hope for resubmission, and after some back and forth we ultimately were able to resubmit the game. Of course, info regarding what was wrong the first time was rather vague as you might expect (we got one general pointer, but no idea of the scope of what they wanted us to address, and whether that really was all that would be objectionable or if that was just the first thing they ran into), so the resubmission (for which we might only get 1 chance for all we knew) took some thinking. We worked with Dendo-Denkido to alter key graphics under the info we -did- get, while otherwise staying true to the game’s artistic style, and after an initial rejection (fortunately, not a ban this time) with further required adjustments outlined, we ultimately got the game accepted for release!

In good news, the Steam version is probably a lot more YouTube friendly. But if you prefer to play the game as it was originally intended, we have a patch up on our homepage which will restore the Steam version to its original shape.

Make sure to enjoy the craziest game you (probably) never heard of!