First post on my blog! I actually used to post brief snippets of visual novel playthroughs and thoughts on my tumblr account, but that’s basically dead now.

I wanted a fresh start specifically so I could talk about my recent experience with a visual novel that remains poignantly in my mind—paleontology’s SeaBed.

Zetsuna’s back, this time with SeaBed! Thanks to Fruitbat Factory for their hard work localizing this title!

A one-off kinetic novel project from doujin circle Paleontology Soft, SeaBed is the tale of childhood friends turned lovers, Mizuno Sachiko and Takako, who have now been separated by some strange circumstance that neither can recall. Enter Narasaki Hibiki, the friendly neighborhood psychiatrist (and also another childhood friend of Sachiko’s) who takes it upon herself to bring some clarity to the situation. Together but also separately, all three go about their daily lives in the heyday of the late 1980s as they inch closer to finding out just what happened.

SeaBed offers a fascinating and thought-provoking story about dealing with loss as well as lots of subtle mysteries that may not be apparent at first glance, but you’ve got to possess an iron stomach for extremely descriptive, dull, mechanical prose and ultra slow pace to truly enjoy it.

For full disclosure, I played this game using a free review copy provided to me by Fruitbat Factory.

Seabed is a yuri mystery visual novel, developed by Paleontology Soft and published by Fruitbat Factory. It primarily focuses on the story of three women as they go about their daily lives. These women are Sachiko, an introverted lover of books, Takako, an energetic woman who rarely thinks before acting, and Narakaski, a childhood friend of the two who meets Sachiko again as a psychologist. The central thrust of the plot is Sachiko’s grieving after Takako’s disappearance. From there, the story unfolds.

Another insightful review from Moonlitasteria, this time for our new RPG release Lionheart!

With 2017 already fulfilling its unspoken promise of delivering a deluge of delectable games I will probably never be able to finish, it does become difficult to limit my commitment or even outright pass up on a particularly interesting find. Smaller projects especially seem to have this hold on me. Lionheart, a visual novel/RPG hybrid developed by doujin circle Shiisanmei is a fine example of one that is engaging, but a joy to come back to between play sessions. Players take on the role of Leon, a young man dreaming to be adventurer. After a chance meeting with a young woman named Maria, she enlisted his unique abilities to explore the Magic Labyrinth, “Libra Corridor.”

Chuusotsu is an upbeat story set in a peculiar utopian world that uses humor to explore its deeper themes of motivation and the right way to live. 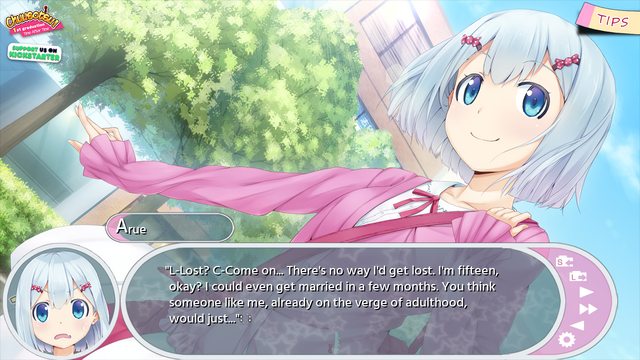 You can meet representatives of the circles at our booth, 7-N01 at the above times. Our star guest, Poppo, will also be giving signatures whenever she’s not out and about.

We also have some super limited badges from various games available at our booth, for those quick enough to visit us each day.

Hope to see you there!

Upon launching War of the Human Tanks on Steam, we asked players to design a new map to be added in celebration.

Out of the submitted designs, three unique designs were chosen to be further polished and created.

We are now happy to announce version 1.10 of War of the Human Tanks, which includes three all-new maps under Free Battle:

“Hellish Infrastructure” – fight your way through claustrophobic corridors with enemies all around. Survive till the end for a handy little bonus (Unlocks after Episode 7.)

“Outpost” – A head-on collision with a difficult enemy force and multiple paths of approach. The enemies here really pack a punch. (Unlocks after episode 11.)

“Ambushed” – a gauntlet style map with limited deployment and an overwhelming enemy.  Can you take the heat? (Unlocks after Episode 7.)

The maps are balanced to be hard but beatable on first playthrough, and will be unlocked by playing their respective episodes, or if you are already past that point, by progressing to the next episode from where you are. The patch also includes minor tooltip fixes.

In celebration, we are knocking 25% off the price of War of the Human Tanks – Imperial Edition for 10 days!